I grew up with L.A. as a constant, not something I repped or something I felt that needed defending. It was the backdrop for all my experiences and a supporting character in the grander story of how my parents entered this country as refugees to eventual American citizens. All of this was something I never thought about growing up. It was my home and nothing more. I took it for granted.

It wasn’t until I moved to San Francisco to go to college that I started developing a longing and love for my hometown. San Franciscans are zealous and boisterous about their love for their city. That love is palpable in the energy that keeps the city moving. San Francisco is easy to love though. It’s beautiful, filled with rolling hills and clean air and gorgeous bay views. Los Angeles is big and hard to locate, it’s dirty and often the true view is blocked by the facade of a lewd industry. There’s traffic, dirty air and lots of people who have no interest in really getting to know anyone.

San Francisco is full of people in love with San Francisco, albeit complaining about rent but that’s always followed by, “but it’s worth it to live here.” Los Angeles is full of people complaining first and then mentioning the weather second as a small silver lining. I constantly hear people that are not from the Greater L.A. area complaining and talking about my hometown like they have it figured out. I usually say nothing though, because I’ve come to realize that a love and appreciating for this town has to come from your own perspective. It’s something you have to come to on your own, and that a lot of people never do. I’ll let people have their own relationship and hope that they get to a place where they can find their love for it. I just know that my love has grown from something I took for granted to something I appreciate and am grateful for.

A city no worse than others, a city rich and vigorous and full of pride, a city lost and beaten and full of emptiness. It all depends on where you sit and what your own private score is. – Raymond Chandler

Los Angeles is the place where my parents became who they are. The time I feel most connected is when I’m driving around with them and they tell me all the important, happy and sad moments that happened on L.A. streets. They can point to the first restaurant in mid-City where they had their first American meal. They can point to our tiny Hollywood apartment near a freeway where I came home to after I was born. My dad can point to the street where he had to run home because he had gotten off late and downtown was still dangerous, not yet trendy. It’s a love that can be appreciated in L.A.’s constant companion – your car.

L.A. will never be this pristine thing, it’s big and it’s dirty and it’s tough to find your place in it but I’ll always be proud. There’s lots of great pictures of L.A., bright sunny and shiny…but this is how I want to always remember L.A., nondescript and a little hazy letting you make it what you want it to be. 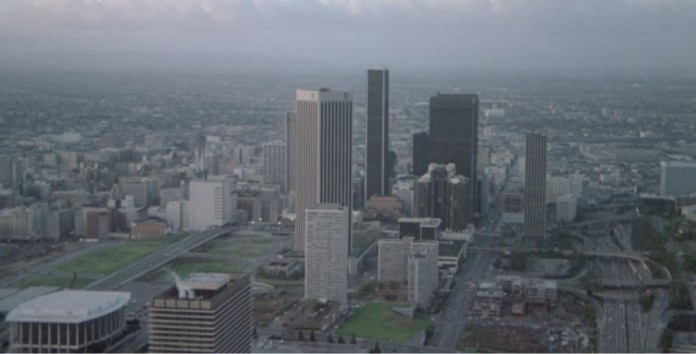